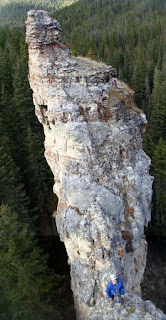 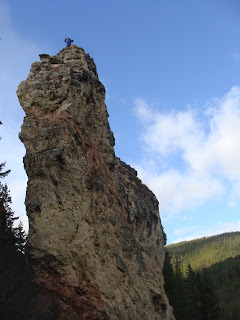 While trail running with Bridget last spring up South Cottonwood Creek, near Bozeman, we ran past what appeared to be limestone spires sticking out from a thick mat of pine trees.  I logged the location of these spires away in my memory, for a rainy day activity, and kept on running behind Bridget with a pounding side ache.

Nearly a year later we were back, we left the ice gear at home and loaded a pack with rock gear.  We hiked up the south cottonwood trail in perfect fall weather to the third bridge crossing (2.5 miles).  From here we walked up the trail another 5 minutes until the spires could be seen on the other side of the creek.  We crossed the creek, hiked to the base of the spires and looked up at limestone choss in all its glory.  As an inspired choss tower connosure I can not pass up unclimbed towers so we tied in. The first view of the cottonwood towers from the trail - "The Ancient Fart Tower" on the right and the "Choss Wrangler Tower" on the left.

The spires turned out to be really cool.  They are overhung, really narrow, and tilt out in strange angles.  There is a notch that separates the two towers on the spires' back (west) side that has a wide crack.  I started up this loose crack that lead to the notch that protected well with cams to a #4.  From here I went up the climbers left tower and found some protection with two ice specters pounded into turfed-up cracks.  I mantled the tiny summit that is reminascent of the 'ancient art of the desert tower' in Utah.  It really is the ghetto version of that tower- thus we named it the "Ancient Fart Tower". 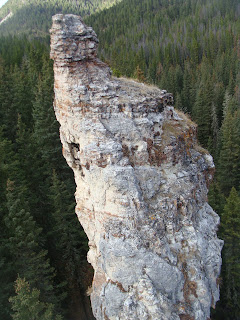 The ancient fart tower- the route goes up the arete in the center. 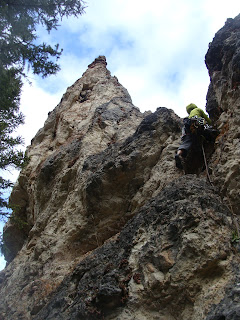 Myself heading up the "ancient fart" tower 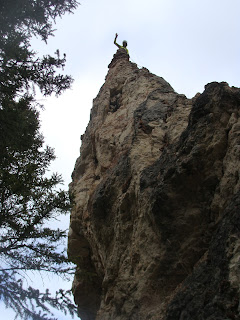 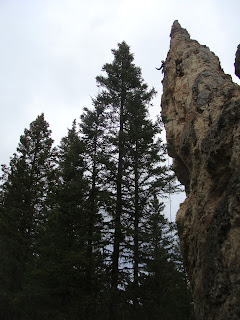 Bridget rappelling off of the ancient fart tower- we ended up slinging the entire summit with cord as an anchor.

After climbing the ancient fart tower we decided to climb the other tower that is attached.  We started up the same wide crack that gained the notch between the two towers then climbed up climbers right on the exposed ridge to the other virgin summit.

Bridget heading up the "choss wrangler" tower with the "ancient fart" tower in the background. 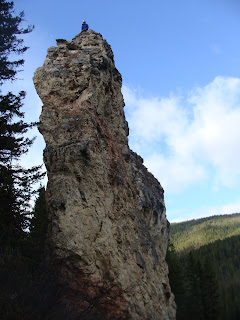 Bridget on the summit of the "Choss Wrangler" tower. 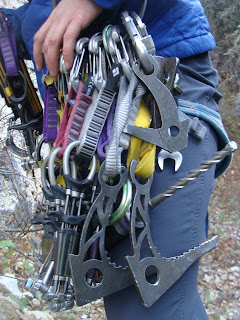 Required gear for the cottonwood towers.

We placed a single bolt on top of the choss wrangler tower in good rock as there was no other option for a rappell anchor.  Both these towers deserve a special rating- a choss rating- to mentally prepare for the climbing.  They both get a Choss 5.7 rating, bring some pitons/ice specters. These towers are chossy as hell, but also good fun and a cheap reminder that climbing inadequate rocks is best approached with humor and zest.