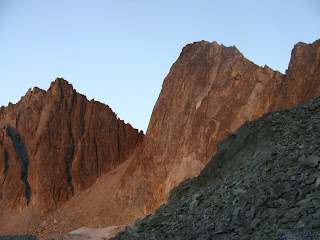 The wall in Alpenglow 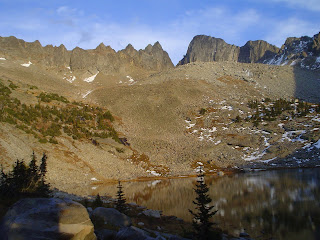 The Cirque above Cotton wood lake


The Dog's Tooth is an alpine wall tucked away in the Crazy Mountains of central Montana. It presides over the head of a beautiful cirque rising above Cottonwood lake and watches over the vanishing rubble of Grasshopper glacier. I have visited this cirque a few years ago and climbed a line on a smaller feature to the left of the dogs tooth (we named it "The Lone Goat" in honor of a lonely billy grazing near by). The Dogs tooth is the proud feature in the cirque and left an impression on my mind that kept calling me back.

Finally this was the season where it all came together.

Scott Salzer and I had talked about going into the cirque and trying to climb one of the features; we both needed to tear off the drama and city grime plastered to our souls by urban life. There is not a better place to cleanse ourselves than on a loose, obscure, alpine jewel tucked away in "the mountains of mountains" (As described by the Native American Crow Indian culture).


We left Bozeman at around 7 pm on a Saturday night and promply got lost in the dark trying to find the trail head. We eventually creeped into the parking lot, Truck Norris gasping from the effort. We racked the gear and got ready for the morning as Jupiter hung low and bright suspended over the southern horizon. 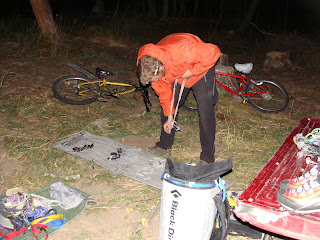 At 5:30am we left the warmth of the bed of my truck and started for the adventure of the day. We brought mountain bikes for the first 3 miles of the approach (an old logging road that is now closed to motorized use)and had fun blasting through trespass creek by headlamp and nearly wrecking every 10 feet from the weight of the haul bag. We locked the bikes to a tree where the road peters out and started hiking the remaining 3 miles to the lake. Day break found us a quarter mile from the lake in beautiful alpine meadows that were wearing the colors of fall.
We quickly skirted the lake and climbed the remaining bit up to the remains of grasshopper glacier, and the wall.
We really had no idea what we were going to climb until a very strange thing happened. As we were sitting and pondering what to climb, a giant eagle flew directly over our heads hugging the wall. The golden eagle had to have had at least a 6 foot wingspan as it glided next to a vertical streak of white rock that went from base to summit. This is what we were going to climb!

We racked up and Scott led the first pitch up a 5.6 section to a ledge composed of gravel. I lead the next 5.7 pitch up better rock to a semi-hanging belay. 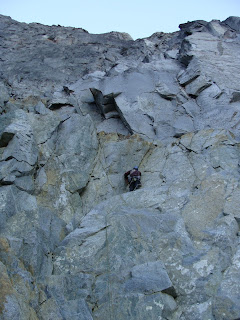 Scott lead a beautiful and scary 5.9 pitch climbing AROUND a huge detached flake that was balancing on nothing. As I seconded the pitch I was going to kick the flake and seperate it from the wall. As I climbed above it I just couldn't do it, it was to big, to scary, to much of a mind fuck to watch it go 400' into talus below. I left it loaded and in place with a calmer mind than if I would have kicked it down. 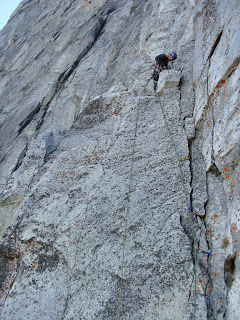 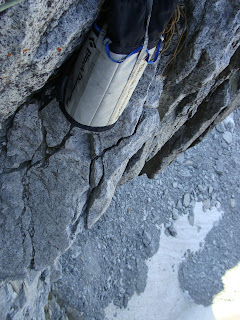 I then lead a steep 5.8 pitch to the only ledge of the route where we lounged, took off our shoes, and ate. Above looked steep and intimidating. I ventured off up a beautiful dark slab climbing finger cracks that protected well and climbed just like the classic "lady fingers" pitch at Mill Creek. This slab ended and the rock turned white and got much steeper. 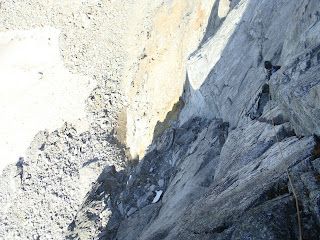 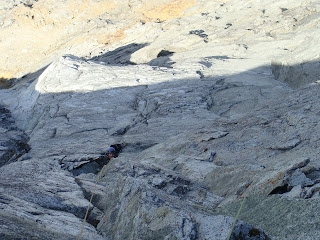 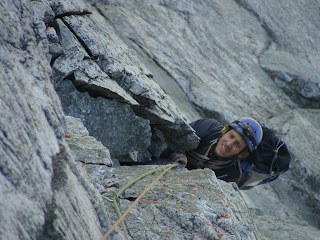 I ventured up the obvious discontinous hand cracks that were surprisingly steep and surprisingly loose. The last 30m had some of the most terrifying climbing of my life. Desk sized blocks wedged together on an overhanging wall, and me smack dab in the center. I had a terrifying vision of the whole mass detaching from the wall, tons and tons of car sized rubble exploding off the face. The strong smell of smashed rock and broken bodies. After 2 hours of free climbing some of the most intense 5.9 moves, checking every hold, and keeping calm, I emerged on a textbook sized ledge with good rock. I put in the remaining 6 pieces I had for the belay... Scott Seconded the pitch with the haulbag on his back and made short work of the epic pitch. The entire time we were on this pitch about 20 crows were flying eye level with us, cawing, cooing, and watching over the strange creatures climbing very slowly upwards. The only thing seperating us from the top of the wall was 30 more meters which we climbed at exposed and fun 5.9 on solid rock. 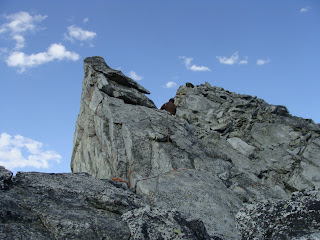 Scrambling to the summit 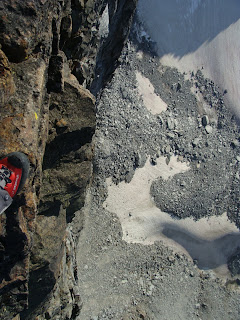 Looking down from the summit

Now at the top we scrambled the last bit to the summit where we enjoyed the views.
We quickly descended towards rock lake, skirted the lake, then gained a pass that brought us back to Grasshopper glacier as the wall lit up with alpenglow. It grew dark again, and again, Jupiter showed its face in the twlight as we ate and drank in the meadow below. We hiked the 3 miles out in the dark, found our bikes, and did 3 miles in 15 minutes (!) where we found Truck Norris waiting for us.
It was a super great adventure, it was like making love to the universe!

summary: To our knowledge there is 1 route on the wall called "The Brother Bear" IV 5.8 A2. It was climbed in 1974 by members of the dirty socks club. Our route is right of this route and climbs entirely up the white streak. We would like to call the route "Old Crows" 5.9 III. We only left 2 fixed pitons on the wall (for belays). 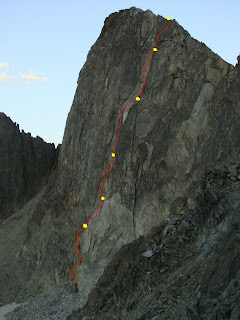