Natural Ice Fall in Respect to Tree Density and Damage 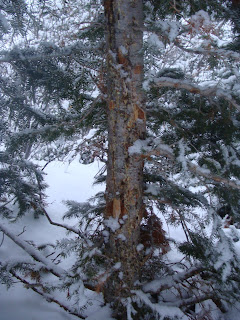 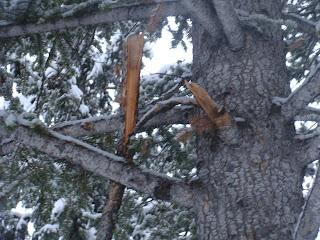 I have to do a study on Rocky Mountain Vegetation for a college class this semester. I tried my hardest to combine climbing with the project, and it was a success. Here is a preliminary write-up of the paper. I'm sure there are errors all over it (and all the numbers and statistics have been removed for clarity). Maybe a few of you out there will think this is interesting.

Hyalite canyon, Montana, contains an abundant wealth of natural waterfall ice and is internationally recognized as a destination area for ice climbers (Josephson, 2002). Many of the ice climbs reside on cliffs located in a forest environment under the control of Gallatin National Forest (USFS). Throughout the winter months (October through April) the ice pouring off the cliffs forms into massive features weighing many tons; these features detach from the cliff face sporadically throughout the year and fall into the forest below. Previous information on tree density and damage caused by falling ice in this fashion is unknown. The results determined from Hyalite canyon suggests that tree density is affected by falling ice and the resulting damage is easily observable. This suggests that the study sites are constantly under disturbance and never reach climax vegetation in their respective microclimates.

The ten sites described in this paper were evaluated based on two main determinants. The first determinant was that the disturbance beneath the ice climb was caused primarily by falling ice only. This site was found to the south-west of the grotto falls trailhead in Hyalite canyon. The cliff is a natural basalt cliff band which has weathered slower than its superior and inferior strata. The cliff and ice falls contained are locally referred to as “the unnamed wall” (Josephson, 2002). While there were many other sites to choose from, the unnamed wall was chosen because it was not affected by natural avalanches and natural rock fall is at a minimum. The second determinant for the study was choosing ten sites where the vegetation met the assumptions of statistics (normal population {not previously logged}, variances in population are equal, and random samples)(Weaver, 2002). Ten sites were chosen in total and at random based on the above determinants. Five of the sites were chosen and described along the trail just below the ice climbs (but not affected by them) in the same general environment type (climate) and altitude as the remaining five disturbed sites. The disturbed sites were chosen in relation to where the ice tends to form on an annual basis. These sites have local names and are called; “Jeff’s Left”, “Jeff’s Right”, “The good looking one”, “Bingo world”, “The Thrill is gone”, and “The itchy and scratchy show” (Josephson, 2002). These climbs were further chosen due to the lack of a significant avalanche path below the ice climbs (the falling ice acting as a trigger on the snowpack and releasing large scale avalanches). These “ice triggered” avalanches cause large scale damage below the ice climbs beyond the parameters intended for this study. All ten sites were measured in a plot system of 30m x 30m.

NO STATISTICAL RESULTS ON THE BLOG, SORRY.

Conclusion
The results suggest that the affects of ice falling each winter from selected sites cause a disturbance that is statistically significant in two parameters. The first parameter is related to tree density, and the second is tree damage. Sites located beneath ice flows showed significantly less tree density and significantly more tree damage. The sites selected for suggest that ice is the contributing factor for these differences. Further study is needed in order to determine if the disturbance is prohibiting the climax vegetation for this certain biome to develop and the resulting disturbance is keeping the sites in study in an extended seral vegetation community type (Weaver, 2002).