No beginning, no ending: The first winter ascent of The Beartooth Spire 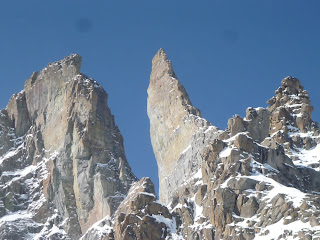 The "Tooth" Photo by Rusty Willis

No beginning...well I guess it has a beginning and from this beginning the rest of my modern life can be traced. The Beginning. It all started one fine summer day in Montana, the Beartooth Mountains to be more specific. The long shadows of the Beartooths have always touched me. I grew up in Shepherd, Montana, not exactly a climbing hot spot, so this is the story of why I'm a climber...the beginning.

The road wandered up, up, up; winding and weaving around cliffs and stands of dwarfed white bark pine. The air grew colder, and thinner too. My youthful mind was absorbed with the drama of the vistas around me; Soaring cliffs, deep valleys where silver streams cut through forest, clouds playing on the edge of August snow. We were driving up the Beartooth pass. My Father was driving, my Mother riding shot gun, and me in the back seat, face plastered to glass. The drive to the plateau was astonishing, then suddenly anticlimatic, as precipice turned to pasture. The top of the plateaus in the Beartooth Mountains suddenly appear, usually flat, and usually appearing overgrazed. They are in fact very important and filled with unusual flora biodiversity. The elevation hovers around 10,000'-11,000' and the mountain range trends east-west, resulting in a unique environment where a cold and short growing period has resulted in flowers that are found else where only above the artic circle, and only in certain locations. But anyway, it was all lost on my youthful mind.
The road continued up the rolling tundra to a section where the plateau narrows and the road switchbacks on its self. It's here, just below the "summit" of the pass, where one can glimpse the Beartooth Spire.
I saw this spire, and I knew I would climb it someday. From that point on I became a climber, and the rest is history.


So here I am decades later, at the base of the Bear's tooth (or the tooth for short). I have climbed the spire now 3 times in summer, and have tried climbing it in winter so many times I can't even remember an exact number. Last year it almost killed Rusty Willis, Stan Price, and myself with an avalanche. We have paid our dues with bitter cold, wind, deep snow, long approaches, jungle thrashing through pines, and general Montana winter conditions.

We learned something every time we had tried climbing the tooth and this time we were going with a completely different style. Disaster style, lighter than alpine style.

We left the trail head at 1:30am with day packs. (we did have 2 luxuries, a jetboil stove and insulated pants). We skied the first 6 miles easily, then jungle thrashed up to black canyon lake. The valley took us to the base of the tooth just as first light hit the spire. 11 miles, roughly 5,500' elevation gain, and 7 hours later.
We geared up and climbed a couloir between the mini tooth (see previous blog post) and the long ridge leading up to the spire. We climbed this long ridge in about 10 pitches with difficulties up to M5. We finally gained the base of the tooth proper and climbed the remaining 4 rock pitches to the summit!

Finito! it was done. We signed the summit register, then rappelled down to the base of the tooth proper. We spotted a couloir on the north side of the spire in a sort of notch and opted to rappel this as the ridge we ascended was complicated. We rappelled this leaving most of our nuts and pins as anchors (every 30m) into the night. Darkness found us on the wrong side of the spire, dog tired, hungry, and mentally wasted from psychological rap anchors. We walked around the ridge and climbed back up to the col seperating the mini tooth from the ridge we just climbed. We down climbed to our waiting skis, jetboil, and warm coats. We brewed some noodles and had only one mishap when the jet boil tipped over and spilled the hot water. We both fought off sleep (now 11:00pm), as we ate in a cold wind. We bundled up, then skied out (bad dukkha, don't ask). We reached the trail head at 4:30am, 27 hours after leaving.

A classic alpine climb. I feel privileged to have made a significant mark on this beautiful spire. The "first" doesn't matter, the numbers don't matter, all that matters is the relative personal significance something holds, and how much you tried, reguardless of the outcome. Cheers, Loren 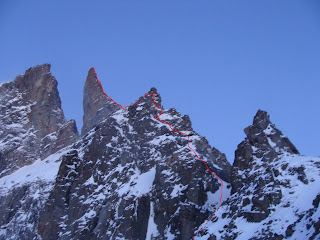 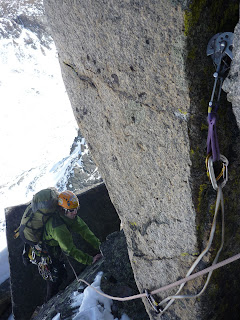 typical climbing, myself on the ridge 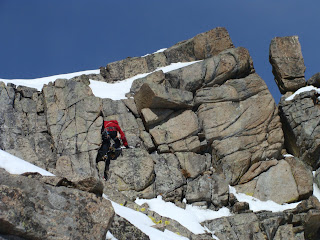 typical climbing, Rusty on the ridge 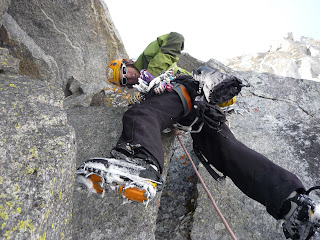 typical climbing. myself on the ridge 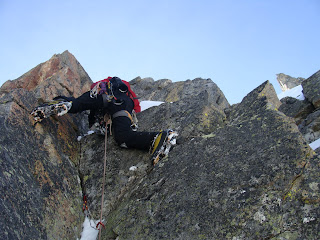 Rusty mixing it up on the ridge 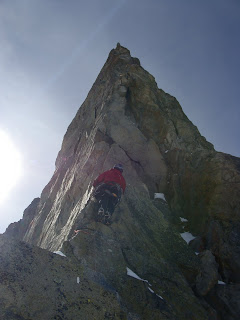 Rusty on the tooth proper 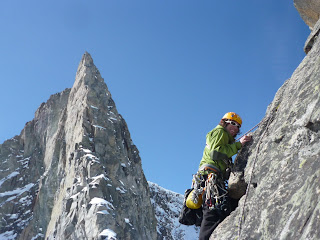 myself on the ridge 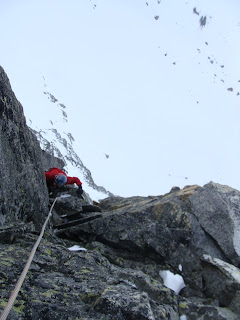 Rusty heading up the last pitch 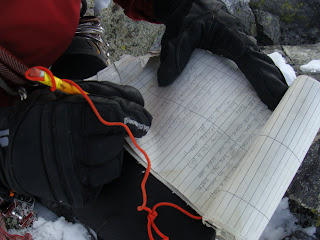 It looks like this climb has been getting a bit of press!
Here are a few more stories on the climb, Cheers!