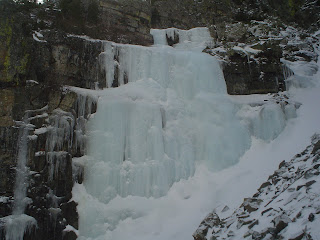 Wolverine falls, Bearcat is the smear on the far left side of the falls proper.

Years ago Rick Dvorak and I stumbled on a beautiful, unclimbed, ice line in the Crazy Mountains of Montana. We somehow managed to climb the ice flow in two pitches (it was one of my first ice leads ever, and Rick's first time ice climbing). I still remember being so scared on the first ascent that I nearly shook myself off the climb. When I reached the top of the first pitch I lowered our only set of ice tools (used DMM predators) down to Rick so he could second the pitch in soft boots and strap on crampons.

It was undiluted adventure.

I had seen wolverine tracks in the area thus we named the route "Wolverine falls" WI3/4. 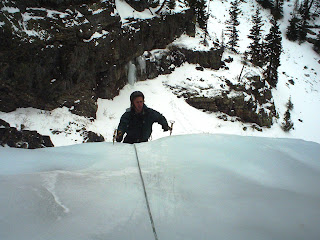 Rick following on the first ascent of Wolverine falls. Notice the bike helmet. The ice in the back ground is the route "Chicken Wing" M5/6.

A few years passed and Kevin Volkening, Kasey Welles, and myself went back to climb a mixed line located next to Wolverine falls. We hand placed two bolts in the blank rock above the ice then placed natural protection to gain a belay/rappel tree. We named the route "chicken wing" M5/6, in honor of the amount of bar food we devoured after the climb in Livingston. 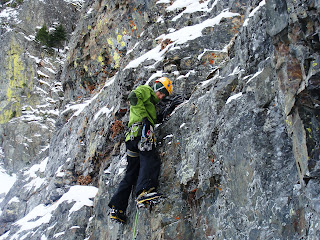 Myself on Chicken wing.

By now I thought the the area was climbed out in terms of new ice or mixed lines. It takes new eyes to see what was sitting directly in front of us the entire time. Ron Brunkhorst and Olin Erickson invited Bridget and I to Wolverine Falls to try a new mixed line, of course I jumped at the opportunity. It was also Olin's Birthday thus a group (the first annual Crazy Mountain Ice Fest?) was born. 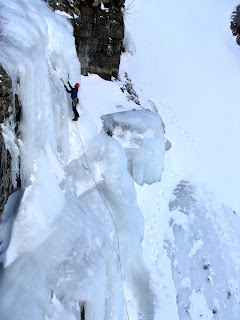 The new line was an anemic drip on Wolverine's far left side ending in a rock dihedral. Since Ron spotted the line I offered to take pictures from above.

Ron climbed the thin ice route easily. Another mixed line in the area was born. Ron cleaned the route on rappel, We pulled the ropes, and I lead the route for the second ascent 20 minutes later, then Bridget climbed it for the third. 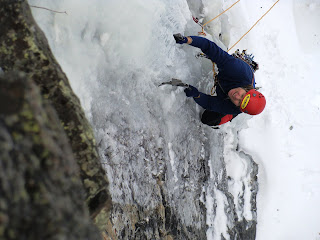 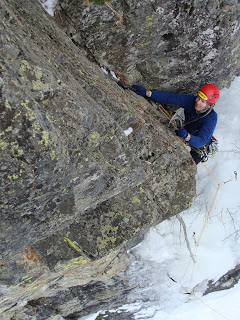 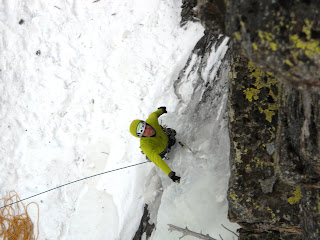 Myself on Bearcat. Photo by Ron B.

The Crazy Mountains continue to amaze me.

Cheers, Loren
Posted by Loren Rausch at 3:22 PM No comments: