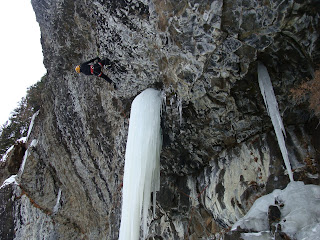 I don't really get to excited about climbing individual pitches; be it rock, ice, or bouldering, but this last week I climbed a single pitch that was the exception.

Kyle Vassilopolus and I headed out to Hyalite canyon this past tuesday to work on some mixed climbing routes. This is Kyle's first real season on ice and he is already crushing it, granted he is a very strong rock climber (more on this later). We headed up to the bingo world cave, on the unnamed wall, where Kyle has been working "Northwest Passage" (M11). He roped up, stretched a little, then jumped right on the climb figure-fouring out a hrorizontal roof. He reached the lip of the cave, shook out, then climbed (bare handed) to the anchors and clipped the chains, it was his 3rd try at the route total! 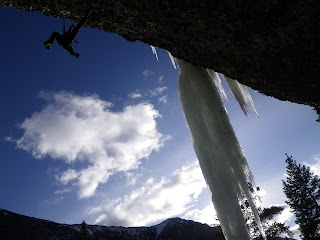 After Kyle sent his project we walked over to a route called "Roman Candle" (M9-) that was put up a few years ago by Whit Magro. I laced up my boots, stretched my arms, then climbed the route to the anchors (Whit bolted an extension to the top of the cliff, "The Roman" M10+, which I did not do). 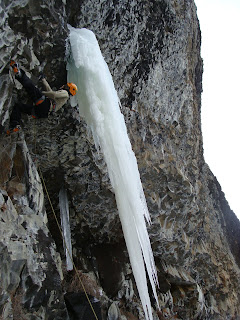 myself on roman candle last year. 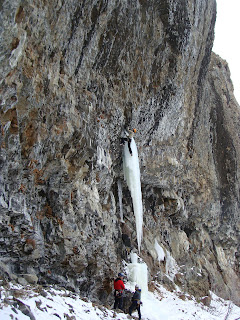 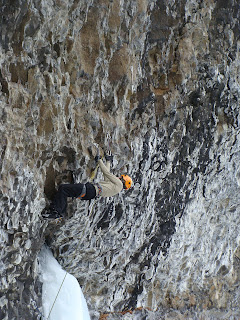 I couldn't believe that we both just walked up to our projects and climbed them first try of the day! I had been working on roman candle for a while and the route felt impossible when I first tried it, maybe this is why this route means so much to me, because I put a bit of effort into it and was able to make the subjective impossibility possible!

So I mentioned that Kyle was a strong climber. The day before Kyle climbed N.W. Passage (M11) he climbed "Montana Beef" V11. A V11 and an M11 within 24 hours of each other....has this ever been done before?

Anyway, it is great to see some progress in my own climbing and be inspired by watching Kyle climb!

***Kyle continued to crush this season, here's a write up on his mixed climbing from ROCK AND ICE.***

Cheers, Loren
Posted by Loren Rausch at 1:46 PM No comments: