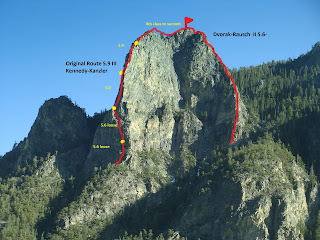 It seemed like there was alot of interest in Westminster Spire. I included a topo of the classic original route and the mellow route Rick and I did.

A few months ago I was asked to write a small story pertaining to climbing in Montana. I choose to focus on the process, not the result, of being a climber. The story I wrote is called Zen and the Art of Failure. In summation the story was about failing in the mountains, the learning process, and the importance of persistance and process.

This spring has been providing me many opportunities to practice the art of failure. Montana has had an unsually high snowpack, colder than normal temps, and an abundance of moisture. These factors have lead to many talented climbers having an unsuccessful climbing season in the mountains around Montana. The past few days Rick Dvorak and I have had the same results. We tried to ski into a certain project (10 miles one way) only to find the road is washed out (adding on 8 more miles of travel). We abandoned plans, drove to the top of the Beartooth Plateau, and spoted a nice looking mixed line. We fumbled the approach, then finally got in a position where we could see the entire route. We found it capped by a 30' overhaning snow mushroom. Fail #2.

After wasting a day pissing in the wind we decided to just go rock climbing. Westminster Spire looked to be just what we needed. I had climbed the spire before along the original line (up the sharp arete) so we decided to try a new line up the feature. The only problem was that I forgot to bring rock shoes. I had a pair of approach shoes along (cirque pros) so we decided to give the spire a shot.

We chose a moderate line on the spire's right side that arched like a staircase directly to the summit. We approached the spire and geared up beneath the feature. We decided that it looked mellow enough to simul-climb. Rick (who had rock shoes) started up and I followed 20 meters behind. Cleaning the route was easy as Rick placed 6 pieces total on a 600' route. It was a mellow and fun route that felt more like an involved free solo. We summited the spire and basked in the sun. We descended the spire to the rappell anchor where we found rodents had chewed completly through the webbing. We replaced the anchors, then rappelled to the col between westminster spire and a taller (unnamed?) spire. We saw an arete on the spire (directly from the col) that looked fun, so I decided to lead it. After 70 meters of really fun moderate rock climbing we sat atop a second spire. Not a bad way to end a weekend of failures.

We descended back to our packs and hiked out to the car under a light rain. We have no idea if any of these 2 routes have been climbed before. They both were about 5.6 or 5.7 and had loose rock and some vegetation. classic right! 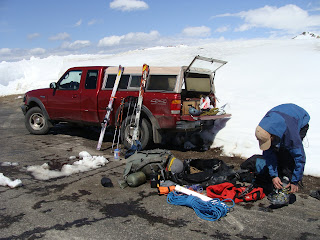 Gearing up for failure number 2 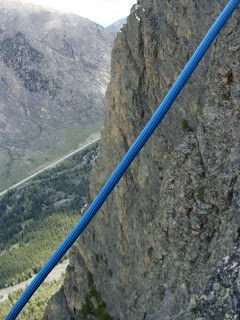 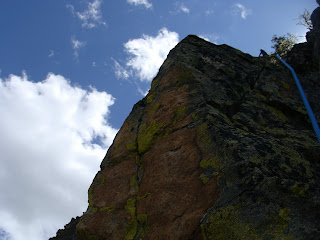 Rick climbing on the arete 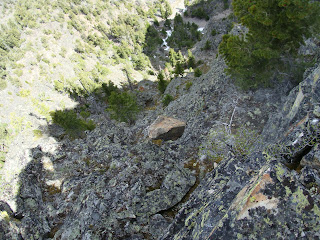 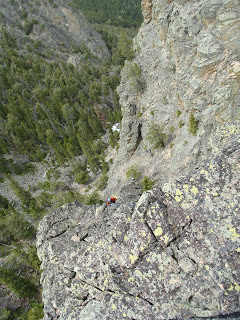 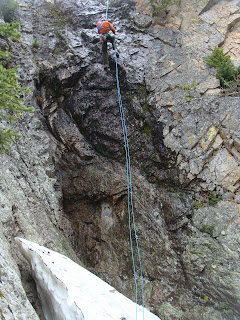 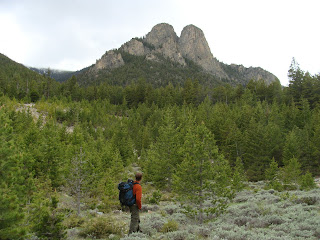 Rick below the spires, the left spire is the higher one. We climbed from the v-notch up the right skyline on the taller spire.
Posted by Loren Rausch at 7:10 PM No comments: 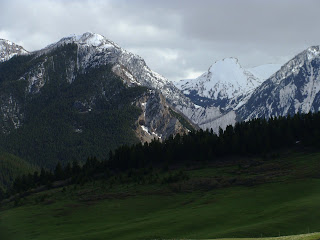 Elephanthead is the strange looking knob in the center

The weather has finally broke here in Bozeman and the spring monsoon has left us with wet rock and piles of snow in the hills. Skiing is in order. Elephanthead mountain is a strange peak located in the Absaroka Mountains just east of Livingston, MT. The peak is a classic ski descent and the five mile and 3,000' elevation gain would be a great conditioner. Olin and I left Bozeman with an alpine start of 9:00am and reached the trailhead soon after. We hiked a few miles on a muddy trail, crossed a few streams heavy with runoff, then reached snowline and skinned the remaining distance to the summit. The weather reports for the day stated that thunderstorms and gusty winds were to be expected. When we reached the summit of the small peak all was calm, then suddenly it was like a light switch was flicked on. I have never been in wind that strong before. I have never had to lay on my side, holding on to a whippet, while putting on my skis. We hastly contoured to the lee ward side of the peak on our skis, getting blasted by the hurricane force winds. We skied 1,200' of open face before reaching the safety of the trees. The experience was more than expected and the descent was a classic Montana ass whooping. good times. 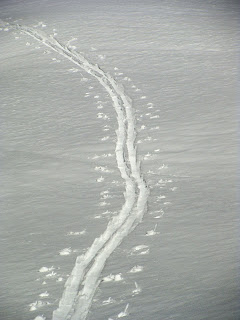 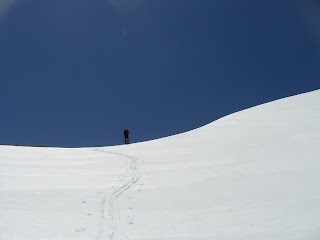 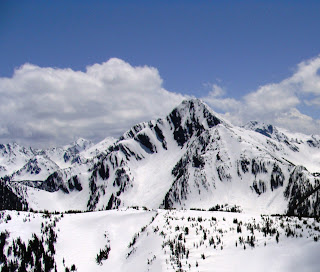 View from the summit moments before the wind storm 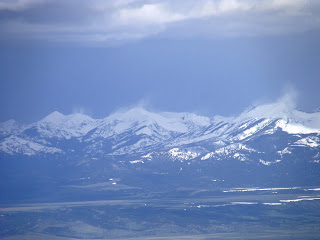 The ridge top winds hitting the Crazy Mountains to the north 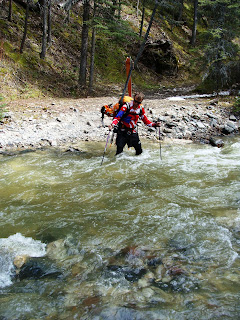 Posted by Loren Rausch at 11:44 AM No comments: