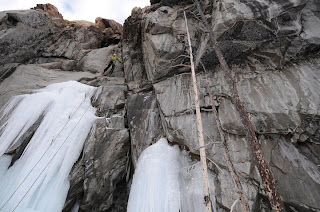 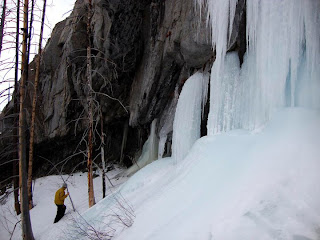 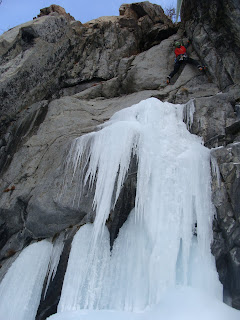 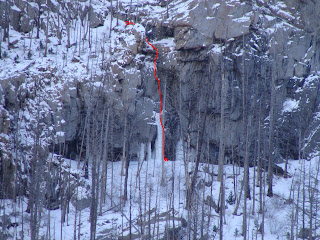 
Erik Johnson and I escaped for a very quick trip to the Beartooth mountains yesterday. We left Bozeman early (we were going to leave at 6:00am but I slept through my alarm, waking only after Erik was standing outside knocking on my door and calling me repeatedly on the phone); this was the first shenanigan of the day.
After finally waking up we drove the couple of hours to the east rosebud valley and parked under crow mountain, and a mixed line that I had spied last year. We grabbed our packs and tried crossing the river. About half way across on very thin ice Erik punched through and soaked his boots/socks/pants from the knees down. Shenanigan number 2. Thankfully there was an extra pair of socks in my truck and Erik had brought a light weight pair of "extra" boots. Erik changed into dry boots and we walked down the river to a better crossing point.
Hiking up to the base of the climb was a pain. The soft snow, loose boulders, and downed timber made progress tedious but we finally reached the base of the route around noon as the wind groaned through the dead trees. We anticipated a short pillar of ice leading to a overhanging granite face that might require bolts for protection. As we looked at the upper face it was obvious that it would take gear (and plenty of it). I decided to sack up and try it onsight.
I climbed the short pillar (25') to a good rest and beautiful gear placements. The rock headwall was composed of a slightly overhanging dihedral with a torque crack in the back. I sewed this crack up and drytooled past the overhang to a good rest, then passed a second overhang at the top, groveling on the slab topout I thought I was going to take a huge fall! Somehow I teetered to the end of the difficulties and slung a giant dead tree. Erik climbed it next, cleaning HUGE blocks of granite by accident (now the route should be safe).
We looked around the "new" FRA? mixed climb and discovered many more possibilties for hard, traditional mixed routes. This small crag has potential!
By now it was getting late so we hoofed it out to truck norris, staying dry over the river crossing. Erik then lead Hellroaring falls in the dwindling light, we decended the trail in blackness, drove to the Cowboy and ate giant burgers.
Up on gaining the Bozeman pass a snowstorm struck and the road turned icy, there were cars in the ditch, upside down, every few miles. We creaked back to Bozeman at 25mph arriving around midnight.

We decided to name the route "Shenanigans" (FRA?) due to the sillyness of the day. It is about M5 in difficulty (25 meters long)and protects very well with cams (to 3"). It is located about 1/4 mile past the bridge (where the road turns to gravel again) and is on a gray cliffband to the east (crow mountain). about 1/4 way up the mountain.


(If anyone wants to go climb the other harder mixed routes on the cliff band go for it!)
Posted by Loren Rausch at 1:14 PM No comments:

A bit of ice 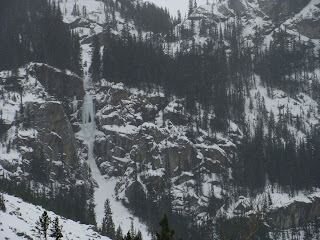 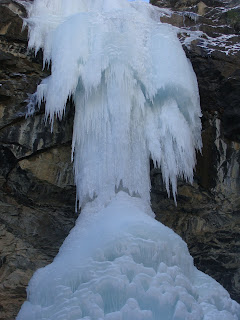 I finally managed to get out climbing the last few weeks. Nothing to extreme, just really good fun.

Bridget and I went to the West rosebud valley and climbed the "Antiduct" a beautiful WI5 ice climb in a neat setting. We were rewarded with great views, sticky ice, and fun climbing. We also went to the East rosebud and did the approach to "Sand Dune falls", an awesome pillar. When we got to the base we found that it had recently collapsed and was reforming, we sat in the sun beneath the pillar for a bit then headed to Redlodge for food. It was a fun, well-needed, trip.

I also had the chance to climb an all time classic Hyalite pitch called "Black Magic" with K-bone and Lawrence. It's an old Alex Lowe route that climbs a steep crack to a thin and steep section of ice; it's roughly 5.10-, WI5 and protects with natural gear. The lead was a difficult one for me, I am wicked out of shape and have never been that pumped before! All in all it was a awesome climb. 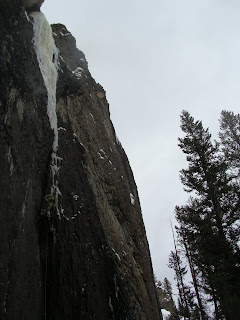 myself on Black Magic 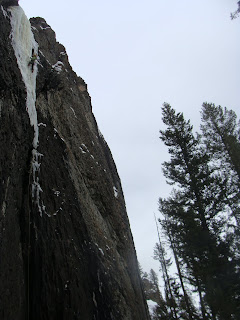 Hopefully soon I'll have a few more posts up about some Beartooth adventures in the works.

cheers, Loren
Posted by Loren Rausch at 1:01 PM No comments: