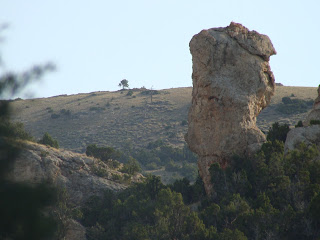 I headed to the desert of Wyoming to try and climb some towers located on in the Bighorn Mountains (the highway 14 towers).  I started up the steep switchbacks just out of the the town of Lovell in the 100 degree temps. This is where the trip took an unexpected turn.  My truck (Truck Norris) overheated, then started sputtering and stalling.  I somehow made it to the top of the pass, but I didn't want to press further into the mountains with a broken truck.  I let it cool down for a long time then got it back down to the valley floor without it dieing (when my truck dies I loose my power steering and my brakes).  I decided to stick around a little closer to the town of Lovell. 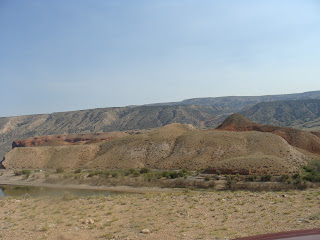 The dirt road I headed up


Just before the bridge leading over the Bighorn River (on the east side) I took a dirt road that lead to a canyon and a steep rocky road.  I headed up the road (my truck appeared to be functioning again) for a few miles to higher country.  The road took a right into a gully and suddenly I was on a serious 4-wheel drive road.  Not to worry, my truck has 4-wheel drive - unfortionaly it decided not to work.  I was forced to do a low percentage reverse where there was no room for error (i.e. big dropoffs on one side).  I some how turned the truck around and got it in a safe location; exasperated I got out of the truck for some air.  This is when I noticed a small tower of rock.

Since I was planning on aid soloing the highway 14 towers I was well equiped to climb this thing.  I packed my bag and set off through the thick juniper trees to the base of the tower.


The tower was about 30 feet tall and composed of limestone.  The North side of the tower had the best rock so I decided to try to aid this face.  I slung a portion of the tower its self with my rope for a belay then stepped off a rock right into A2 country.  The crux came low.  I had to sling a cert knob, then hang on it, if it would have broken I would have taken a 15 foot ground fall into the talus and trees below.  I slowly aided up the face on poor brass nuts and C3 cams.  It got to the point where I was not psyched anymore.  I was trying to climb as clean as possible but the gear was total junk.  I thought I would be forced to place a bolt on the face (something I really didn't want to do).  It was then that I found a wierd pecker placement and finally felt solid.  This type of climbing continued up the short face until the very top.  I was close enough to spit on the summit, yet there were no aid climbing possibilities for me to do, except place a bolt (something I really, really, didn't want to do).  I felt around and found some okay hand holds, stepped out of the aiders, gave myself a bunch of slack in my grigri, then ventured off on some free climbing moves to the top.  The free climbing turned out to be mellow and soon I was on the summit. 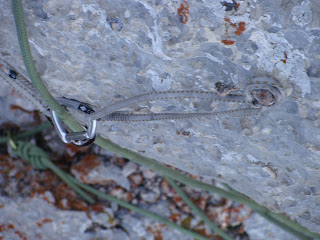 The first "piece" and my anchor below 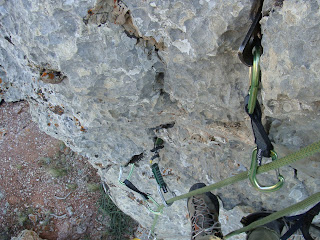 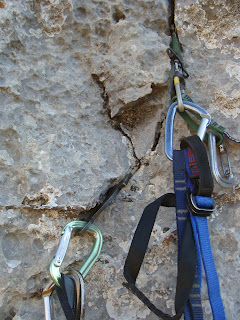 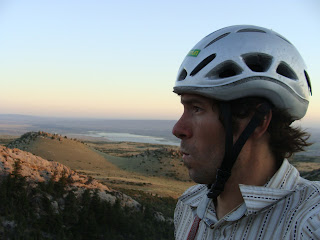 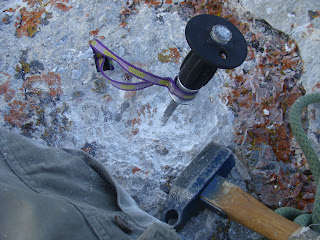 bolting an anchor the hard way 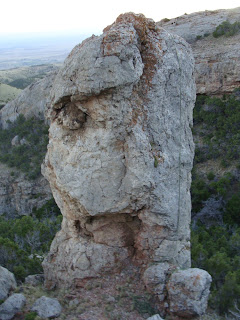 The tower and route with my rope still hanging on it

I looked around for signs of ascent (an anchor or anything human derived) but there was only choss rock and bird crap on top.  I cleaned some loose rock then hand bolted a single bolt on the summit in order to rappell off the top. 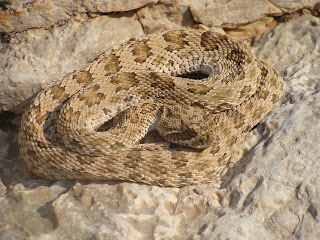 A new friend I met near the tower

The tower was just what I needed, it was a little dose of good medicine.
It goes at 5.7, A2.  Bring a few pins along with a rack of small cams and nuts.

Cheers, Loren
Posted by Loren Rausch at 6:55 PM No comments: 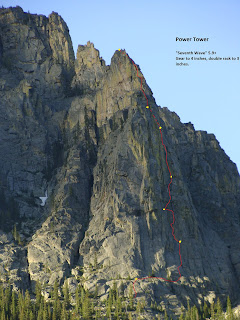 The power tower stands tall over the Mystic Lake trailhead in the Beartooth Mountains. This trailhead is the gateway to Granite peak (the tallest peak in Montana) and it draws your eyes upward as you walk below it.

We had hoped to cross the West Rosebud creek on the bridge near the power station. We talked to the caretaker there and he told us we could not cross the bridge. This is a prime example of why the East Rosebud Creek SHOULD NOT BE DAMED!
access closures, no stewardship, and irrerversible environmental damage...

We ended up walking further down stream and fording the creek. 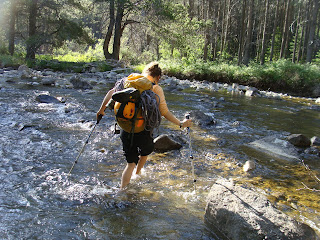 Bridget and I bush wacked up to the base of the tower. We knew of two routes on the feature from the Ron Brunkhorst guide (both around 3-4 pitches long) and done back in the 1970's. We wanted to repeat one of them but we had no idea where they were on the feature. With a sigh we headed up an obvious break in the tower, maybe one of the previous routes?

The climbing was cerebral right away. Bridget lead a glacial polished slab with ground fall potential for the first pitch. A few of the pitches climbed steep, but loose, rock that was covered in lichen. The climbing was steep and intimidating. At the top of the third pitch we almost bailed off the route, but we are stubborn and continued slowly upwards. 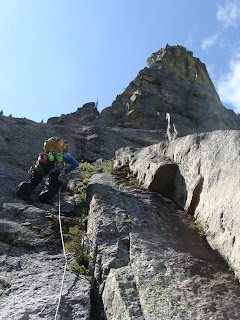 Bridget on the first pitch 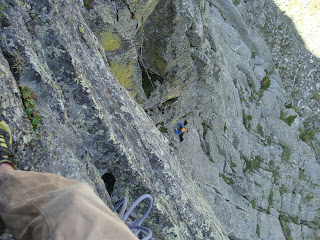 Bridget on the third pitch

The best pitch came high on the route (5th pitch). We called it the "guillotine Pitch". A steep .3 tips crack lead up to a hanging guillotine flake that was hollow and hanging in space directly above. A sneaky series of crimps and slopers went left to right directly under the guillotine. The crux move came where one was on these face hold and had to kick out right to a heel hook on a block, then body tension into a corner. It was a sporting alpine move, pretty memorable. 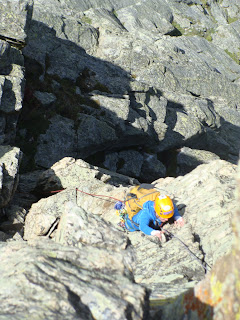 Bridget on the guillotine pitch. 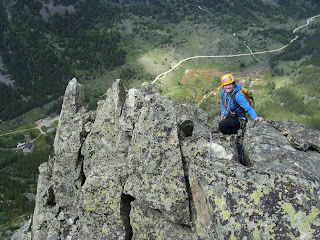 Bridget on the top with the power station far below.


The wind on the summit

We continued upwards over increasingly better and better quality rock. The last pitch climbed an overhanging hand crack that was amazing! We found some ancient tat on the summit leading down the west face of the tower. We replaced the webbing, then did two 70M rappels into a gully. We passed an ancient fixed nut leading us to believe that the existing routes were on this side of the tower. We don't know for sure though. 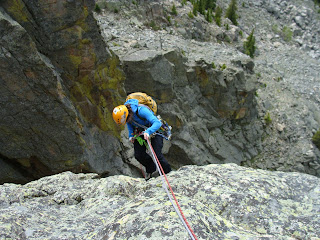 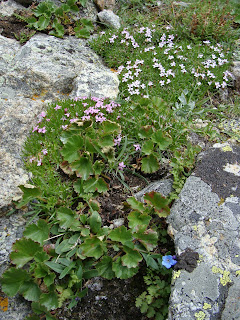 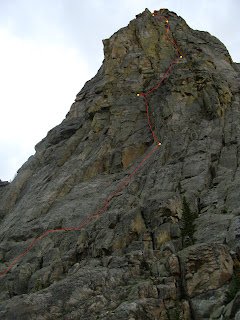 A different view of what we climbed.

We think we did a new route on the tower (you're never 100% sure in the Beartooths' however). If so we thought "seventh wave" would be a good name for the route. It's 7 pitches total and is solid 5.10-.

It was a really good tower that is close to the car.


Posted by Loren Rausch at 7:36 PM No comments: 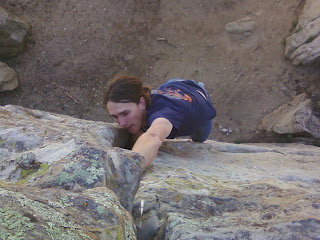 
The Dirt Fest (a local outdoor bouldering competition in Billings, MT) just occured. I had always wanted to boulder in the competition but for some reason I could never make the event, this year was my first time at the competition and I must say it was worth it. The sandstone climbing is high in fun factor, the event is really low key and friendly, and the hosts (the local climbing gym - Steepworld) are fantastic.

I grew up climbing these same sandstone blocks while in High School and I was always saddened by the trash in the area. It comes down to decades of abuse by careless beer drinkers- shattered glass. The area (Zimmerman Park) is now regulated so no partys can occure thus the park is much cleaner. Well anyway, Erik Hayes (who also grew up climbing on the Billings rims) and I got to talking about how we needed to organize a clean-up day. We thought that the Dirt Fest would be a perfect opportunity to try a little stewardship. Jim Rott and Chris Guyer (from Steepworld) jumped at the idea. La Sportiva gave us a shoe certificate to award the garbage clean up winner, which was awesome! It's a great way to win a free pair of shoes independently of how hard one climbs.

We passed out trash bags to the participants and most every one who climbed collected garbage! It was awesome! The winner, Ryan, won by collecting pieces of glass all day long, by the end of the day his garbage bags weighed more than him! 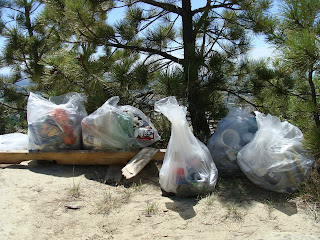 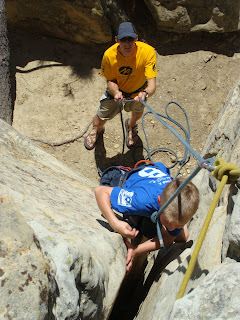 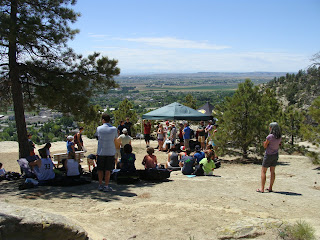 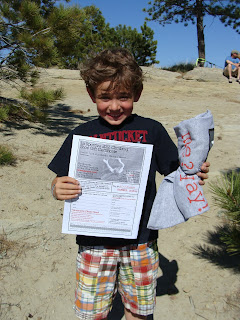 Ryan (the winner of the clean up). You can't fake excitement like this!


It was an awesome time, thanks again to Steepworld and La Sportiva!

Cheers, Loren
Posted by Loren Rausch at 9:39 PM No comments: