An ascent of Iddings Peak 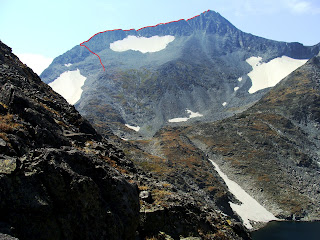 Iddings peak is the second highest peak in the Crazy Mountains of central Montana.  The entire mountain range is an anomoly, it resides in a basin feature (i.e. the mountains shouldn't be there), the rock is ignious and metamorphic, and the relief in these mountains is enormous for such a "low" mountain range.  It's a unique place.

I have always wanted to climb this peak's long east ridge, and with the rest of the mountain ranges in Montana being on fire, this was the logical choice.

I leasurely hiked into the beautiful cirque that contains Pear lake and set up a camp near the inlet at a small tarn.  I spent the day exploring the two tiny pocket glaciers that surround  the peak.  They both had small terminal moraines which is a good sign (you can see one moraine in the picture above).

I awoke when it got light out then headed up the few thousand feet to the base of the east ridge.  The night felt really cold and I was surprised to see that the tarn I was camped at was frozen over.  Once on the  east ridge I found the rock to be a bit loose (expected) but really, really good climbing as well.  The ridge was mostly 4th class for about half a mile, exposed, windy, with great views.  I summited the peak then descended the entire ridge back down because it was so fun (one can excape the ridge just below the summit pyramid). 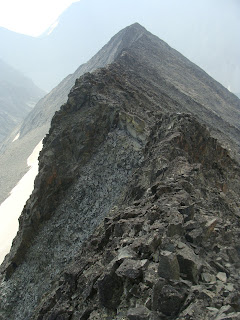 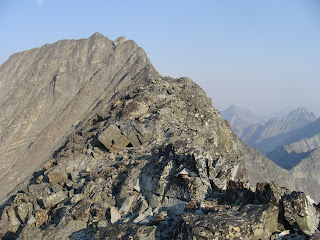 The east ridge with the summit pyramid still 1/4 mile away. 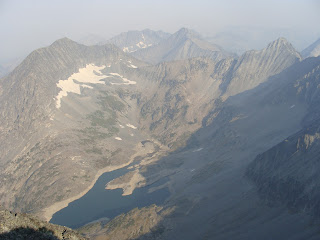 ﻿Rock lake way down there, the haze is from all the forest fires in Montana. 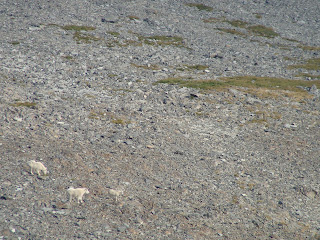 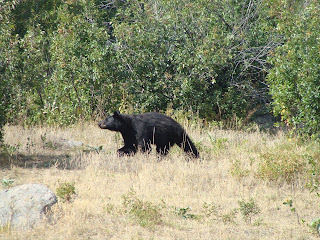 This little guy was more interested in choke cherries than me. 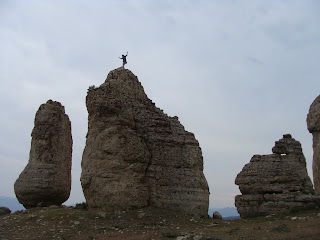 Bridget atop the "Trickster" pinnacle


I have tried making it to the Highway 14 pinnacles (Bighorn Mountains, WY)  earlier this summer but a ghetto truck made getting to the towers unfeasible.  Bridget and I finally made it this past weekend, but we barely made it out of the area.

We arrived at the Coyote rocks area in the evening with pent-up energy from the drive.  We immediatly free-soloed the "trickster" pinnacle (5.6) and sucked in the view of the area; what a setting!  We were at timberline, there was a snowfield near by, and there were hundreds of domestic sheep grazing around us and the towers.

We ended up climbing most of the towers in between rain storms. 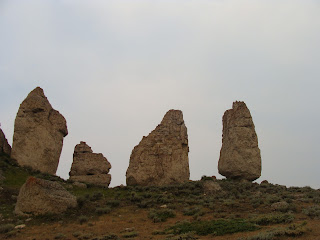 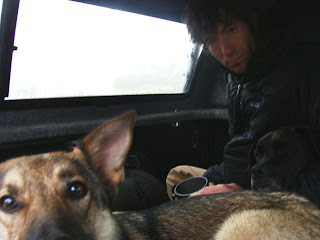 We did alot of hanging around in the back of the truck with two wet dogs waiting out rainstorms. 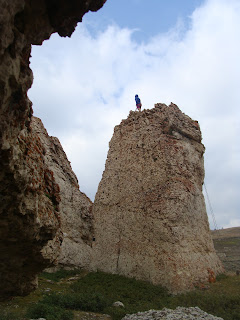 Bridget atop the "Yipping Coyote Tower" 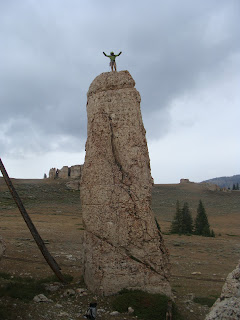 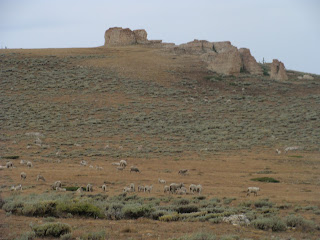 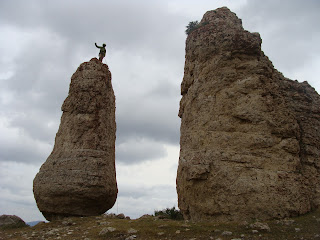 The highway 14 pinnacles were really fun to climb at but it was adventure climbing.  There was alot of loose rock and the leading was pretty heady (i.e. don't bring alot of gear because you won't place it).  We almost got stuck there as well.  The description of the area states not to drive on the 4x4 road when it rains.  We decided it was no big deal to drive out once we climbed most of the towers so we headed down the rutted road.  It turned out the road turnes to gumbo mud when wet and getting out of there was the most gripping part of the trip; but we managed to make it out with out destroying the truck.

We then headed to drier places (Tensleep) to go sport climbing.  I have never been to Tensleep before so it was time to drink the cool-aid.  I found the stone to be awesome, the climbing pumpy, and routes bolted liberally.  It was stellar! 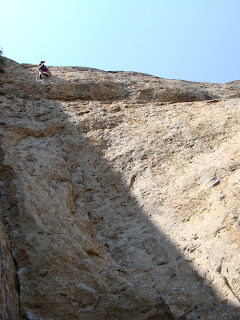 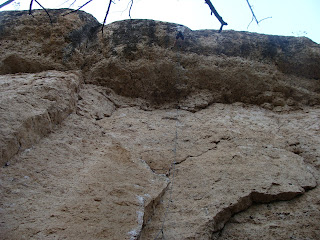 Myself on the huge roof of "killer karma".

East Ridge of The Grand Teton 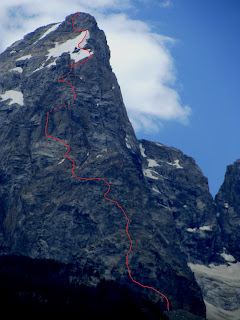 The East Ridge of The Grand Teton


The 4,000 foot east ridge of the Grand Teton is one of the most eye-catching lines in the park when viewed from the Snake River plain.  For years I have sat and wondered what it would be like to be kicking steps up the summit snowfield, the exposure must be crazy;  well it is!

Bridget and I left late last saturday and hiked to Surprise lake where we dropped into Glacier Gulch and the Teton Glacier terminal moraine.    We found a nice bivy cave right at the start of the route (where the moraine butts up against the Grand Teton). 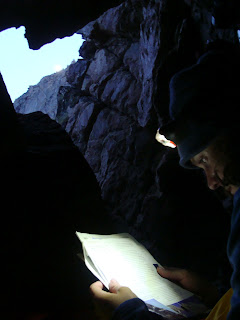 Bridget in the first Bivy cave 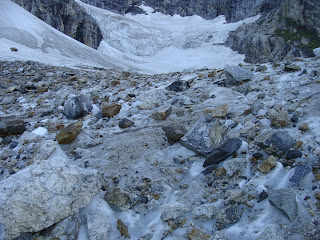 I am a facinated by alpine glaciers so I had to go explore the Teton Glacier.  It didn't dissapoint. 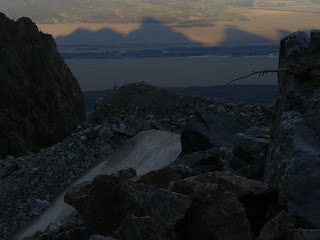 View from the first bivy﻿

Bridget and I awoke at 3:30am and cooked some breakfast in the darkness of the bivy cave.  At 5:00am we were climbing up the initial portion of the route.  The majority of the climbing (up to the Molar tooth) was steep walking with a few short 4th and 5th class steps.  Once at the Molar tooth we found the fun 5.6 chimney which was lead in one long 70m pitch to the notch.  From here we climbed the wide crack on the "tricky traverse".  I really enjoyed this portion of the climb, the rock was fine, the climbing steep and exposed. 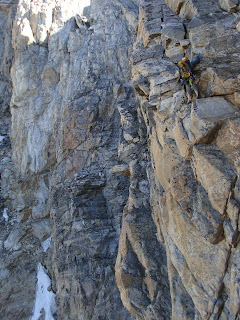 Bridget leading the second portion of the "tricky traverse". 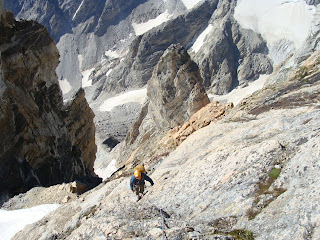 Bridget climbing above the second tower.

We simul climbed the rest of the route from the col behind the Molar tooth.  The climbing was easy, but exposed and sometimes loose; but it was always good.  We finally got to the best portion of the route- the summit snow field.  We put our boots on, donned an ice axe and set off up the snow climbing together.  I was sucking wind and the sky was begining to darken from a small storm cell.  The knife edge of the snow arete was exhilarating as the exposure off the north and south sides of the Grand Teton dropped below our feet. 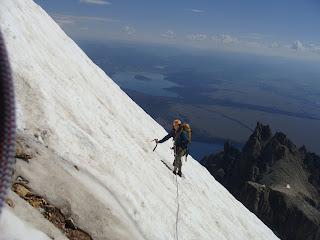 Bridget on the summit snowfield


We reached the summit block and sprinted left to a loose ledge and some fifth class climbing that lead us to the summit at 11:20am.  We sat on the summit for about 20 seconds as the small storm cell caused the air around us to buzz with electrical energy. 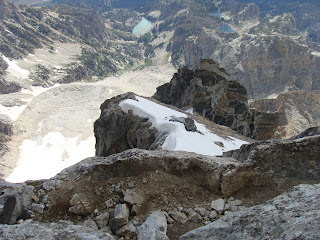 looking down the long and convoluted east ridge from the summit

We ran down the Owen-Spaulding route as the thunder crashed around us; thankfully for us the storm veered to our North and we missed the worst of it.  We got down to the lower saddle and met up with a friend who guides for Exum.  We ended up doing some alpine bouldering, maybe the best bouldering setting I have ever had the privilage to climb at!  We bivied at the saddle under a rock as it rained.  We had planned on linking the North-West ice couloir on the Middle Teton on this trip as well but upon inspection the ice couloir was melted out in the lower part.  We ended up carrying ice gear (and bivy gear) up and over the Grand Teton - good training.    We finished the next day by hiking out to the trailhead and swimming in String lake.  The climb was long and we never saw another soul on the route, perfect! 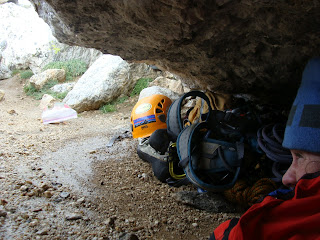 Bivy number 2, hiding from the rain 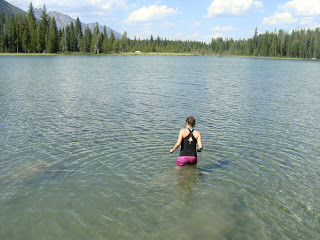