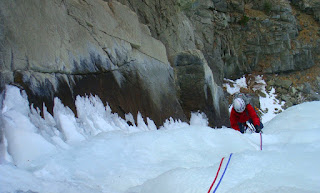 Lately I have been motivated to climb as many ice routes as I possibly can (in between student teaching) with a personal bias towards obscure or unpopular routes. I decided that I'll try and climb all the "recorded" ice routes in the Beartooth Mountains to ensure the quality of obscurity. This last weekend Bridget and I headed to the Stillwater River valley near Nye to climb "Nyes' ice". Nyes' ice is a long (180m, WI2/3) moderate climb that spills over a beautiful cliff band near the Stillwater mine. The climb sits entirely on the property of the mine. The Stillwater mine digs up Paladium and Platinum and is the largest paladium producer in the world (used in electronics). Having the ice climb lie on a mine's property makes for a unique situation. We had to ask for permission to climb the route from the guard station at the enterance to the mine, luckily the route is visable from the guard station so it makes explaining what you want to do/climb much easier. We lucked out and the guard let us climb the route (it turns out that to climb the route on the weekend you must call and ask permission on a business day to get formal permission from the higher ups).

We ended up having goldy-lock conditions. The ice was fat and sticky, there was hardly any snow, the valley was beautiful, there was abundant wildlife, and the climbing was 100% type 1 fun.

The reason I'm talking this route up so much (it's only WI2 for all you radsters) is that it is the best route of the grade I have ever climbed- pure hippy holler glee! 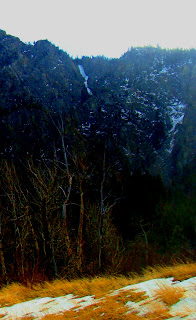 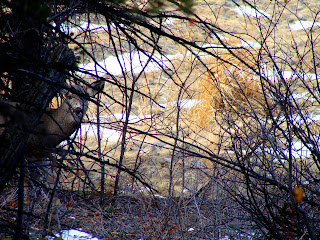 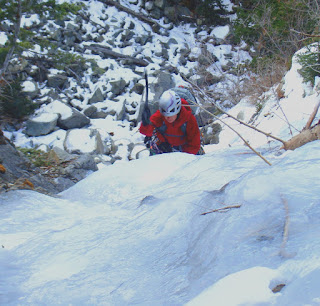 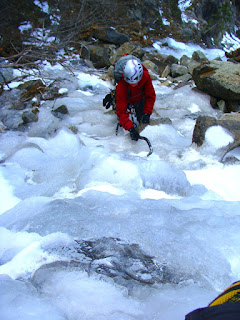 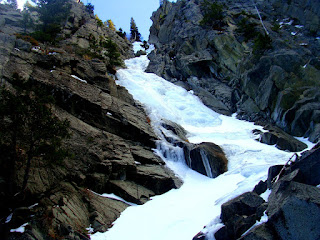 yee haw pilgrim! the upper pitches of the route. 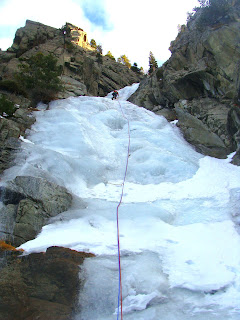 Bridget leading on the upper pitches 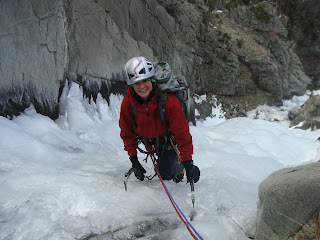 Bridget coming up the final pitch- all smiles. 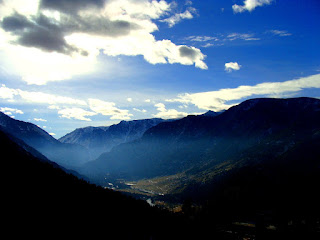 Nice views from the top 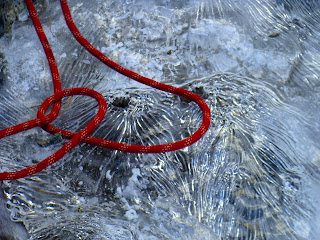 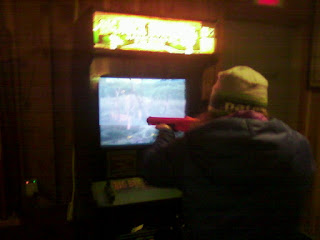 One of the best parts was eating at the greasy spoon of "Carter's camp" (the hotel/post office/eatery/saloon) in Nye.  Bridget going big buck hunting. 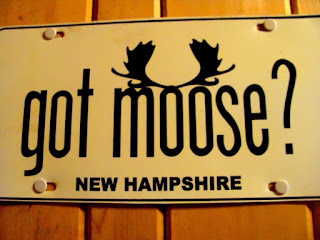 This past holiday season found Bridget and I on the East Coast of the U.S.A. We enjoyed Christmas and New years in Massachusetts but spent the time between in the White Mountains of New Hampshire ice climbing. As a native westerner I must say I was impressed with the climbing on the east coast, the nice people we met, and the terrible weather that adds character to the experience.


Upon arriving in Franconia Notch (New Hampshire) the weather turned for the worst.  We wanted to do some routes on Cannon cliff but the winds blew us to the sheltered climbing area called the "Flume".  It was a great setting. 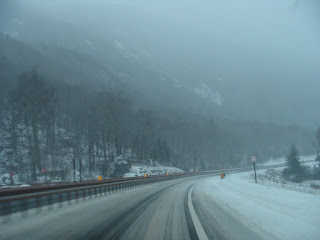 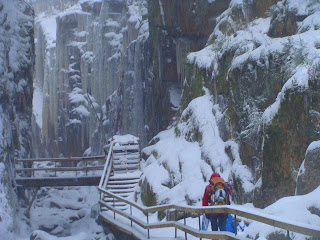 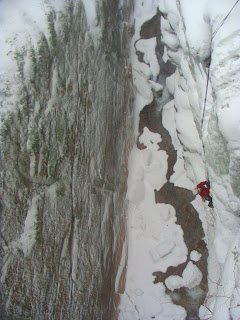 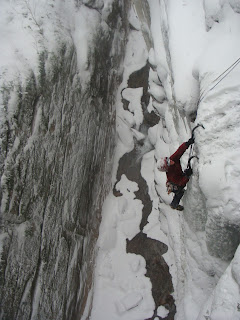 Bridget climbing at the flume 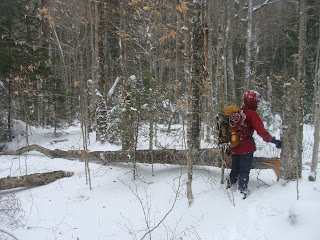 The most dangerous part of climbing at the flume was the raging wind which was knocking down big trees all around us.  One tree fell 20 feet in front of us on the hike out to the car.

After the flume we headed to Frankenstein cliff to go ice cragging.  We climbed a few of the classic routes (after getting lost on the drive and wasting half the day). 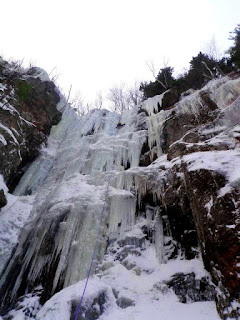 Myself leading the classic "Dracula" at Frankenstein. 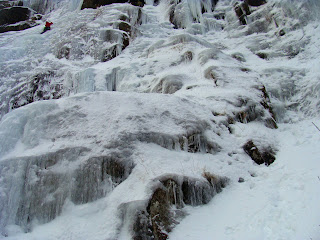 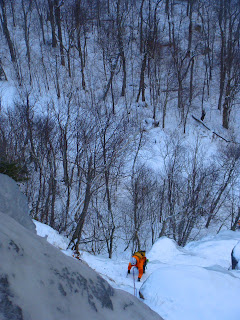 Bridget coming up the second pitch of the "Standard route".

Throughout the entire trip I just wanted to get into the bigger mountains but the weather was terrible- a wet, cold, high humidity, windy kind of terrible.  We looked up the weather at Mount Washington everyday and it was consistently 70-80mph sustained winds with a temp hovering around -4 F.  When we saw that we had a day where we might be able to get on Cannon cliff and climb the "Black Dike" route before another weather system moved in we jumped at the chance.
Climbing with a bunch of other people on a multi-pitch ice route was a novel experience for me as I tend to stay away from falling ice, however, by hanging out at the base of the route I was able to find a pretty descent ice screw that someone dropped earlier in the season-winning!  All in all the other groups on the route were really nice people and we had good conversations at the social-belay hours, and the route was indeed as classic as its reputation. 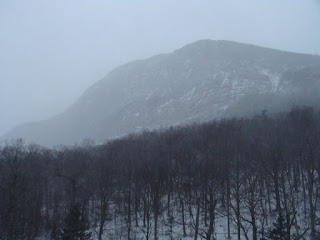 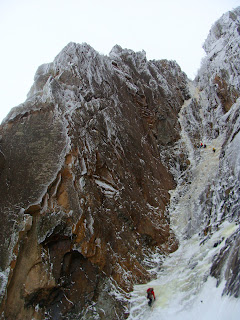 Looking up the black dike with a few parties already on route. 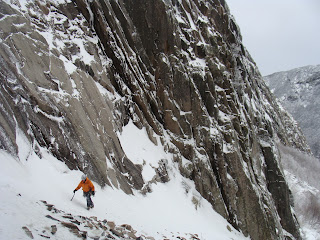 Bridget looking for dropped gear at the base of the route. 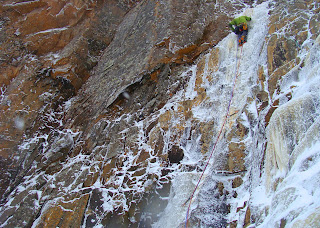 Myself leading the crux middle pitch. 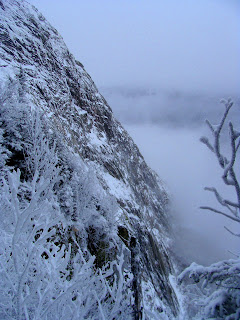 Cannon cliff from the "Black Dike" top out.

Climbing in the east blew me away in respect to the amount of ice climbing there is to do.  I saw more ice in one valley than we have in entire mountain ranges in Montana.  I feel like I barely climbed any ice on the east coast, and I'm already anticipating another holiday visit 'out East' with ice gear in the bag!